The sound of a sentence

At the top of my list of favorite children’s books is “Goodnight Moon,” with its soft lines and easy rhymes (Goodnight stars/ Goodnight air/ Goodnight noises everywhere.). I never tire of the story, no matter how many children I read it to. My other favorite is “Green Eggs and Ham,” with its topsy-turvy sentences (I am Sam. Sam I am.) and subversive humor (And I will eat them in the rain. And in the dark. And on a train.).

The playful language found in children’s books comes naturally to us when we are young. We start with “Bye, Bye!” and progress to sing-songy clapping games:

To see what he could see see see

And all that he could see see see

Was the bottom of the deep blue sea sea sea.

As we mature, our delight in sounds becomes less visceral. We study the couplets of Robert Frost, send the subversive punctuation of E.E. Cummings to paramours and contemplate the “

widening gyres” of William Butler Yeats. However, we often lose the child’s love of chaotic vowels and knocking syllables. Even when writing about poetry, we bog down in the language of academia. Our sentences get longer as we pile up clauses and struggle to state a thesis. Then, in our professional lives, we get tangled up in bureaucratese and forget our innate ability to play with sound and sense.

Recovering the love of language

Language can still be an adventure if we remember that words can make a kind of melody. In novels, news stories, memoirs and even to-the-point memos, music is as important as meaning. In fact, music can drive home the meaning of words.

Let’s review some of the devices that allow us to write for the ear. With assonance and consonance we repeat, for effect, either vowel sounds (clean…neat) or consonants (Dr. Seuss’s island of Sala-ma-sond). Alliteration refers to the repetition of the initial sound of words in a phrase or sentence (“Hooray for Diffendoofer Day”). Rhyme, seen in that last title with Hooray and Day, sets up an exact correspondence between the final syllables of words (Dr. Seuss excelled in unexpected rhyme, from “The Cat in the Hat” to “Yertle the Turtle”). 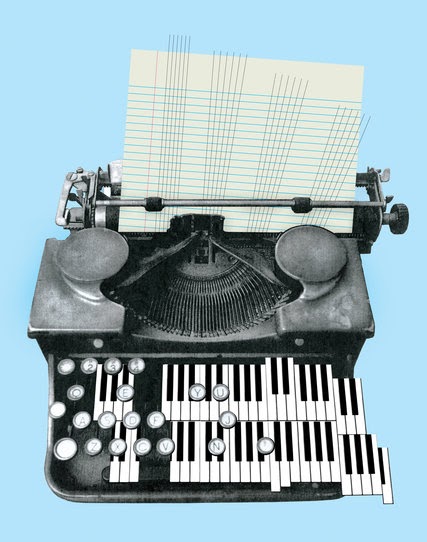 With onomatopoeia, we name a thing (or action) by imitating the sounds associated with it. Comic books rely as heavily on onomatopoeia as children’s books, with “words” like zap, zowie, bam, socko, wow, oof, wham, bing and grrr.

But sound conveys sense in more serious contexts, too, whether the splash of water, the sniffle of a crybaby or the snicker of a bully. Words can play with gravity (bump, dump and thump) and levity (float and flit). A verb like flutter implies not just action but lightness, speed, motion and emotion. It can also cast a metaphorical net, catching images of things that flutter — butterflies, eyes — as well as related traits like beauty, innocence or delicacy.

These devices are often obvious in poetry, but we have to look harder to see them in prose, especially because they often work on a subliminal level. What do you notice about the relationship between music and meaning in this passage, from Virginia Woolf’s To the Lighthouse?

…the monotonous fall of the waves on the beach, which for the most part beat a measured and soothing tattoo to her thoughts and seemed consolingly to repeat over and over again as she sat with the children the words of some old cradle song, murmured by nature, ‘I am guarding you—I am your support’, but at other times, suddenly and unexpectedly, especially when her mind raised itself slightly from the task actually in hand, had no such kindly meaning, but like a ghostly roll of drums remorselessly beat the measure of life, made one think of the destruction of the island and its engulfment in the sea, and warned her whose day had slipped past in one quick doing after another that it was all ephemeral as a rainbow—this sound which had been obscured and concealed under the other sounds suddenly thundered hollow in her ears and made her look up with an impulse of terror.

Woolf uses “monotonous,” “soothing tattoo” and “murmured” when she’s referring to the “kindly meaning” of waves on the beach (and the calming of thoughts) and then “ghostly roll,” “remorselessly beat” and “thundered hollow” when she’s referring to more ominous forces of nature and consciousness. The first set of words murmurs with soft syllables. The second gives us sounds that register like the beats of a tympanum.

Such devices don’t have to be literary. We see alliteration, for example, in the titles of best sellers (“

Good to Great”) and advertising taglines (“Guinness is good for you”). It can be silly (General Mills’ “I’m cuckoo for Cocoa Puffs”) or serious (William Safire’s “

Rhythm, or cadence, refers to beat — whether the 4/4 time of rhapsodies or the urgent tempos of rap. It also involves meter (like the iambic pentameter of Shakespeare) and timing (pauses, say, or full stops). In prose — conversation, oration and narration — rhythm is often a matter of patterns, of longs and shorts, ins and outs, ups and downs.

Sometimes simple repetition is used as a device. It might be single words that are repeated for effect, or rhythms within clauses. And sometimes the repetition is enlivened by a twist, as when

Jackson was also cleverly alluding to earlier orators, including the British prime minister

Winston Churchill, who told his Cabinet and later the House of Commons upon replacing Neville Chamberlain in May 1940 (during the German invasion of France), “

I have nothing to offer but blood, toil, tears and sweat.” Churchill’s monosyllables set up a staccato rhythm that is as bold and bracing as the statesman himself.

Martin Luther King Jr. moved the nation in a speech from the steps of the Lincoln Memorial. His sentences, modulating from short to long, are pointed and poignant. He repeated “one hundred years later” four times, to emphasize the “chains of discrimination.” He repeated “now” to explain why civil rights could not wait (“Now is the time to make real the promises of democracy”). He reiterated “I have a dream,” elevating his speech to incantation. His wish that his children “not be judged by the color of their skin but by the content of their character” became an iconic example of alliteration.

In the often-repeated quote credited to William Butler Yeats, a “poem makes a sound when it is finished like the click of the lid of a perfectly made box.” This click can happen in prose, too, when meaning and music, words and wisdom, combine to establish a writer’s voice.