Painters can teach us about the practice of sketching people

Most writers who consider themselves storytellers—whether they are poets, novelists, or narrative journalists—know that characters are key to any great yarn. Yet developing characters is harder than you think. Especially minor characters, where we might only have a few words to make an impression. The ability to craft a deft “character sketch” may be more important than a deep “character description.”

Writers can take some cues from great painters. The young Picasso started with life drawing and detailed portraits. As a child, he was encouraged by his father, José Ruiz Blasco, who was an artist himself. One of his first drawings, done at the age of 9, was a fully fledged figure depicting Hercules holding his club. At 10, Picasso started formal art training in La Coruña, where he copied classical drawings and models as part of his drawing exercises. 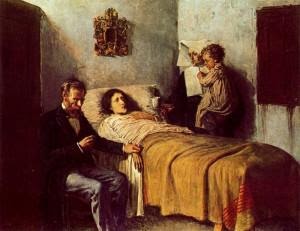 He moved on to experiment with formal elements (during his Rose Period, Blue Period, and Cubism). These experiments, of course are works that made him famous, but Picasso always sketched as well. Grâce et Mouvement shows how his ability to depict a grouping had evolved. 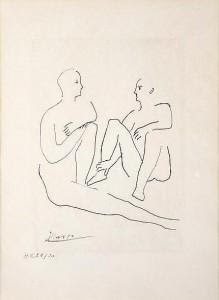 In the late 1920s and early 1930s, especially, Picasso removed extraneous detail and weight from his drawings and prints, preferring to exhibit simple line drawings. Perhaps the most famous is his Nude (Paris or Boisgeloup) from 1931. That one only took four lines. 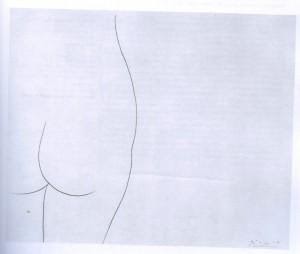 Think of how many artists keep sketchbooks, or work on countless charcoal drawings before moving to the final canvas. The artists I’ve known are forever sketching. An Italian painter and early mentor of mine was once, in a restaurant, drawing my face on a napkin and commented on the lines between my eyebrows. He asked if I frowned a lot—showing how physical details lead an artist to the psychological.

How do we translate this to writing?

Spellbinding narrative almost always turns on great characters, so the writer, too, ought to become an inveterate sketcher. Dedicate one composition notebook or moleskin to character sketches. Here's a sketch from my notebook, done after encountering an ingenuous young man on a flight home to California from Hawai‘i:

Met Johnny, while at the gate in Honolulu: 20 years old, mixed-race (black, American Indian, and some sort of white), beanpole-like, fetching combination of wide-eyed curiosity and hard-luck stories, naive and street smart. He was raised in Berkeley, went to Malcolm X Elementary, worked at Johnson's Barbershop on Sacramento, went to Hawai‘i to cut hair with his uncle, had his brand-new equipment robbed, was heading home to get his old equipment and see his three-day-old brother. He wants to go back to Honolulu, where he and his uncle cut hair "off of Likelike." I sensed something truly sweet about him, answered his funny questions about Hawaiian history ("is it true they had warriors, but the white man had guns?"), gave him a brief history of Lili'uokalani, told him to visit ‘Iolani Palace when he goes back, took a gamble and offered him a ride home. Bruce was dubious, but then was as taken in as I had been. We left him at his mother's house, where a pink Karman-Ghia and a VW bus painted with flowers were standing guard. He put Bruce's number into one of his two iPhones—the work phone—and told Bruce he'd give him a haircut anytime, "cheaper than SuperCuts, and better."

{This post is excerpted and adapted from the introduction to

Writing Character, a fill-in book from the

San Francisco Writers Grotto. It consists of prompts and space to write, providing opportunities for writers to develop their own characters.}